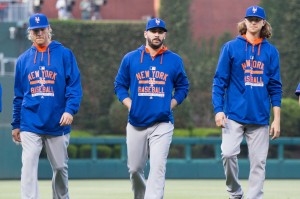 From the rotation to the bullpen, to reserves in Las Vegas, this is shaping up to be the deepest Mets pitching staff in a very long time. Regardless of which 12 or 13 guys make the opening day roster, the number of available arms runs about 20 deep.

Assuming health, the rotation will begin with Noah Syndergaard, Jacob deGrom, Matt Harvey and Steven Matz, with one of three of Zack Wheeler, Robert Gsellman, or Seth Lugo taking hold of the fifth spot. The remaining two will provide rotation depth. Likely, one will stay in the bullpen to serve as a long man/sixth starter with the other keeping loose in Las Vegas in case of injury. While last year’s spat of injuries was more than normally expected, it’s rare that a team makes it through the season with just five starters the way the Cubs did last year. Odds are, all seven will get major league starts. If more are needed, Rafael Montero and Marcos Molina will be ready for call up from the Las Vegas rotation.

Pitching injuries are inevitable, as are in-season struggles. It’s nice to know the Mets are well stocked with the quality arms needed to keep them competitive all season. Hopefully, the lineup will keep up its half of the bargain.

22 comments on “How deep is this Mets pitching staff?”