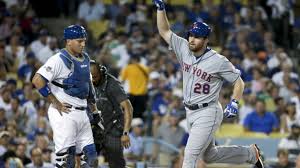 Daniel Murphy had a fine career with the Mets capped by his incredible 2015 performance especially in the NLDS and NLCS, including a record of six consecutive postseason homers. After that 2015 season, the Mets did not offer him a long-term contract and Murphy chose to sign with the Nationals. Murphy was traded to the Cubs in August, and his contract has now expired, meaning Murphy will once again be a free agent.

There are reasons why the Mets’ management could make a bid to land Murphy. The team needs more offense, and Murphy can still provide that. As recently as 2017 he put up a slash line of .322/.384/.543, including 43 doubles. After the 2017 he did undergo microfracture knee surgery, costing him part of the 2018 season. After returning he got off to a slow start, perhaps due to rust and/or not being fully healed. At any rate, for 2018 his final slash line was .299/.336/.454, despite his slow start. How slow was that start? For the first one half of the season he batted .253, rebounding to .315 in the second half. The man can still hit.

But, some might say, he was never a great defender at 2b, and he’s lost a step. Besides the Mets have Jeff McNeil to play second, and the 2018 rookie was red-hot after he earned his way into the starting lineup. Murphy probably is not a real good fit at second anymore, although he did hold down the fort there for the Cubs in the latter part of 2018. But Murphy does not have to play second for the Mets. Murphy has played a fair amount of first base in his career, including during his tenure with the Mets. He lacks the desired range for an MLB second baseman, but is satisfactory for a first baseman.

First base is an unsettled position for the Mets looking to 2019. Options include the now arthritic Wilmer Flores, declining natural outfielder Jay Bruce, and untested minor leaguer Peter Alonso. Flores is coming off a poor 2018 and has health questions, and Bruce may well be needed more at corner outfield with Yoenis Cespedes out for a good chunk, if not all, of 2019. Alonso may or may not be called up to the big club, and observers agree he needs to improve his defense. It certainly seems like a proven bat like Murphy’s would be an asset to the Mets at first base. His defense as a first sacker likely would be better than all of the other three possibilities mentioned.

Murphy made 17.5 million in 2018, but he will not get anywhere near that in his next contract. He will turn 34 at the beginning of next year. If the Mets can land him for a deal similar to what they signed Todd Frazier for last year (2 years, 17 million total) Murphy would likely earn every bit of that.

The Mets have struggled to score runs for the past two seasons, and creating runs at the opportune time is where Murphy shines. Looking at his 2018 season, in low leverage situations his BA was .277, and in medium leverage ABs it was .303. But in the most important ABs, the high leverage ones, Murphy put up an incredible .371 mark. He hits when it counts.