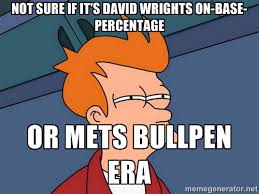 Right now it’s great to be a Mets fan.

The team has won 10 of its last 12 games and after a tough start to the year, finds itself only one game out of the NL East lead and with the third-best record in the National League. The starting pitching has been very good, the home runs have been flying and the bullpen has been superb.

Huh, what’s that last one again?

The average National League bullpen has a 4.26 ERA and a 1.363 WHIP. The Mets’ pen checks in with a 2.54 ERA and a 1.225 WHIP. That’s the second-best ERA and the fourth-best WHIP. For a unit that came into the season as a question mark behind Jeurys Familia, those are some great numbers.

Outside of Rafael Montero and another failed attempt in making him a reliever, each member of the bullpen has either been good or great. The Mets have used nine different relievers and seven of them have an ERA under 3.00 so far. And no one should complain about Jerry Blevins’ 3.18 ERA and 0.529 WHIP.

Overall, the pen has allowed 18 ER in 63.2 IP. Flash back to last year and in April alone, Buddy Carlyle, Montero, Hansel Robles and Carlos Torres all sported ERAs of 4.50 or greater and allowed 13 ER in 21 IP.

The only thing wrong with the bullpen is that it’s been used too much. Last year in April, Mets relievers threw 58 innings in 23 games. Right now it’s been used for 63.2 IP in 20 games. But that’s on the starters. The expectation is that the starters will begin to have deeper outings and that every game won’t come down to a save opportunity.

But it’s hard not to view what’s gone on here in April and not get nostalgic for the way bullpens used to be run, when skippers didn’t manage to bolster the save totals for one individual and players who threw the fewest amount of innings didn’t get the most preferential treatment.

Those things are simply not going to change under the current administration. Perhaps one thing that could be different is the ratio of games where relievers throw an inning-plus compared to the games where they throw less than one inning. To date, there have been 11 outings by a reliever of an inning or more and 21 where the reliever got fewer than three outs.

There are always going to be partial-inning outings. But there should be at least as many multiple-inning outings and that’s just not close to what we are seeing. Sure, maybe you don’t want to have Jim Henderson throwing that much. But why has Robles had five short outings compared to just one long one? The guy was a starting pitcher as recently as 2014.

Of course you have to consider the makeup of your bullpen. Do you have guys who can go more than an inning on a regular basis? If so, how much rest do they need? Is it better for their arms to pitch two innings twice a week or one inning four times a week? I’m not a doctor, I didn’t even stay in a magical hotel so the answer isn’t obvious to me.

Pitchers get hurt, it’s the nature of the beast. But we need to ask if there’s something about having the majority of your appearances be short outings that makes injury more likely to happen. Three pitchers isn’t a trend and on the recent Mets, we don’t have relievers who consistently pitched an inning-plus to compare and see if the results are any better.

Robles and Logan Verrett certainly should be able to handle longer outings. Antonio Bastardo and Addison Reed should be able to provide this occasionally, too. My preference would be to treat Henderson with kid gloves here. And Blevins should be focused on fewer partial innings, rather than multiple innings. In his last season before joining the Mets, Blevins had 64 appearances with 24 short ones.

But to do this, you have to get away from the idea that you need to have rigid non-closer roles. Is Reed clearly better than a rested Bastardo or Henderson or Verrett? Maybe, but it seems far from a sure thing. So why should Reed pitch in the 8th whenever possible?

Things have evolved that way to shift all responsibility from the manager to the player. How can it be the manager’s fault? He used his eighth inning guy! And if it works, the manager pushed all of the right buttons.

Tuesday night, Terry Collins had a good game. He removed a struggling starting pitcher, despite a pitch count that suggested he could go another inning. He got two innings out of Verrett, who wasn’t as sharp as he’s been previously. It must have been tempting to try to get a third inning out of him, knowing he wasn’t going to pitch Wednesday, anyway, and an off day was coming Thursday. But he removed him and ended up with four scoreless innings from his pen.

It was intelligent managing, rather than paint-by-number managing.

This ability to be flexible, to think of something besides rigid roles and chasing the platoon advantage at all costs – is something that would be great to see more often.

It’s my belief that games with fewer pitching changes are more aesthetically pleasing. It’s my theory that a majority of short outings are bad for a pitcher’s health. And it’s my strong suspicion that an actively managed pen, rather than a paint-by-numbers one, will provide more dividends in the long run.

But right now the 2016 pen has been both a strength and a pleasant surprise. Here’s hoping it can keep the results strong the rest of the year.